Week 77 - Sister Where is the snow duh it's everywhere

Well I am  sorry you didn't get my email last week, but I sent it I promise!!!! Hopefully you got it this week! I am tempted every week to just take a nap rather than email but I decided a long time ago that'd be rude, so I'll always send one. Anyway enough about last week, lets talk about this week!
So we had a way awesome week!! Let me tell you though, the world is trying to make me trunky and it's dumb. We went to devotional on Tuesday, you know what it was about? Marriage. Church on Sunday? Marriage. Stake Conference on Sunday? Marriage. Don't they know boys have cooties? SICK. Anyway that's my rant for the week, I guess it's not called BYU-I DO for nothing!!!!!
Tuesday at district meeting one of the Elders dropped a bomb and said he was going home early because he said he just couldn't handle it anymore. The rest of the district of course starts doing the missionary thing and pulling out scriptures and quotes to help and try and convince him to stay. Long story short the whole district (it's all sisters besides him and his companion) ended up crying and convincing him to stay, when at the end him and his companion start laughing. LAUGHING. We are all in tears why are you laughing? Turns out he just wanted to see us "at our best" desperate to help someone. Evil I say EVIL!!!!! Cant say I saw that one coming but kudos to him for blindsiding us all!!!! After district meeting I went on exchanges with Sister Naitoko from Tonga, she is so awesome!! Seriously she's been out on her mission for like 3 weeks and is just a stud!!! She is going to do such great work here, I cannot wait to see how she progresses!!! As we were out on exchanges though we set a baptism date!!!!! It felt so good and she is so prepared to take the next step, I cannot wait! CANT WAIT!!!!!! Be looking out for it February 27th!!!
Later in the week we met this less active guy and he is so cool!!! He has stomach cancer, which is sad, but he is getting one of the first replacement stomachs made from a 3D printer! THAT'S A THING?!?!?!?! Anyway, besides that he hasn't prayed in over two years and he prayed!!! He said he felt like there was nothing else to do anymore! Seriously it was awesome! He said he could just feel God's love for him, and he asked what he needed to do to take the sacrament again, we referred him to the bishop for that, but it was awesome!!!!!
We also went over and taught our investigator from Ukraine, and she just loves the gospel, and she accepted a baptismal date for March 5th!!!!! She seriously is so cool, and she is like so prepared. Though she doesn't understand everything perfectly but she loves how she feels, and she truly understands the principle of faith and how she must act. She knows God loves her and she can feel this is the step she needs to take so she's doing it!!! She is so awesome!
Random story of the week we were out knocking doors and some guy opened one, and it took me a second to realize who it was but then I was like ELDER MACHEN?!?! It's so strange how many RM's from this mission we run into. Sister Poulson made the comment that she knows more returned missionaries from the mission then she knows current missionaries in the mission. It's so true!!!!!!! Anyway I thought it was funny!!!!!
Well I don't have to much more for the week, life is going to, and I am so grateful to be here!!! Hope you have a fantastic week!!!!!!!
Love,
Sister Kaycie Sondrup
check out how giant this igloo is!!!!! 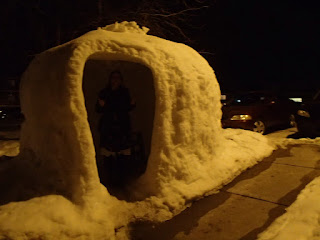