The real reason the dinosaurs went extinct is because they moved to Rexburg and froze to death. 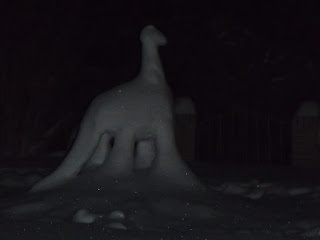 We made a snow man at lunch one day and it was fun, until we realized we built it right in front of our bedroom window and now every time we look out we see a creepy snow man staring at us!!!!! 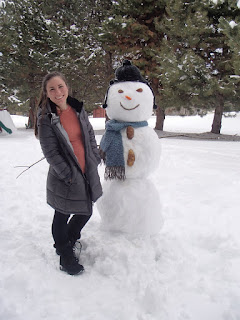 I might be short, but this is a little excessively deep.
​ 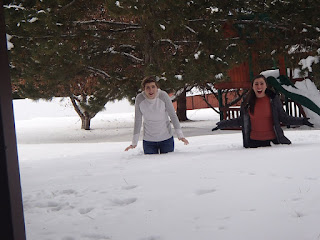 This week was awesome! We had an awesome world wide missionary fireside and it was so good!!! Sorry no major changes to missionary work on the horizon, but we did get to learn about alot of really cool things! The meeting was specifically about teaching repentance and baptizing converts and it was so good!!! Something I love that was focused on was teaching with the spirit. Elder Bednar said something I thought was so cool, he said we can bring the Gospel unto others, but they have to allow it to come enter into them. HOW TRUE!!!!!! All we can do is bring and invite others to draw nearer to the Lord, they themselves have to true accept it and and come into the the fold.

Speaking of Elder Bednar he is coming to BYU-I tomorrow for devotional!!! I AM SO STOKED!!!!!

Once upon a time we have an investigator who needed to meet with the mission president to have an interview, we told him to go to a specific church, but guess what?! There's a million churches in Rexburg and he got lost!!!!! OH NO!!!!! So you know what Sister Poulson and I ended up doing? We told him to meet at worlds gym (he knew where that was) well we didn't have our car that day, so we ended up running about a mile through the ice and snow in our skirts to find our investigator and get him to this interview. It was super important that he met with President Hancock and we had to do what we had to do, but he got there!!!! I can only imagine what people thought as they saw the missionaries trying not to slip and die as they were sprinting to some unknown location. I only can wonder how many snap chats we ended up on...

Yesterday I went out and taught a first lesson to this legit Chinese guy. But what was even cooler was that good ol' Kendyl Hollingsworth was with me!!! WHAT?! It was pretty cool to say the least. Weird though, my two worlds totally collided and it was crazy!!! But It was super fun none the less!!!!! Not to mention this guy is so cool!!! It's been really hard for me lately because we've been teaching alot of foreigners lately and they don't have Christian backgrounds. I am so used to teaching people who at least have some knowledge of Jesus Christ but our investigators right now don't. It's cool how it's helping me become another type of missionary I guess Heavenly Father doesn't want me to be a one trick pony. It's a really rewarding feeling to help someone learn from ground zero who Christ is and what is not only can do, but is doing for them. Seriously it's legit!!!!

Well I have to go, but I have some transfer news for you...I am going to be in Spanish work!!!!!! Just kidding, but Elder Rush called Saturday with transfer info and that's what he told me, he literally was like "have fun trying to learn a language in 6 weeks!" What the heck Elder!! But really nothing is happening for this transfer, Sister Poulson and I will be staying together, but I am going to be a sister training leader again. So we are a split STL companionship so Sister Kolo (not my old companion Sister Kolo) will be my STL companion, and Sister Poulson will be my regular companion. It'll be interesting, but it'll be good! Hope you have a great week!!!!